Life After a Hysterectomy 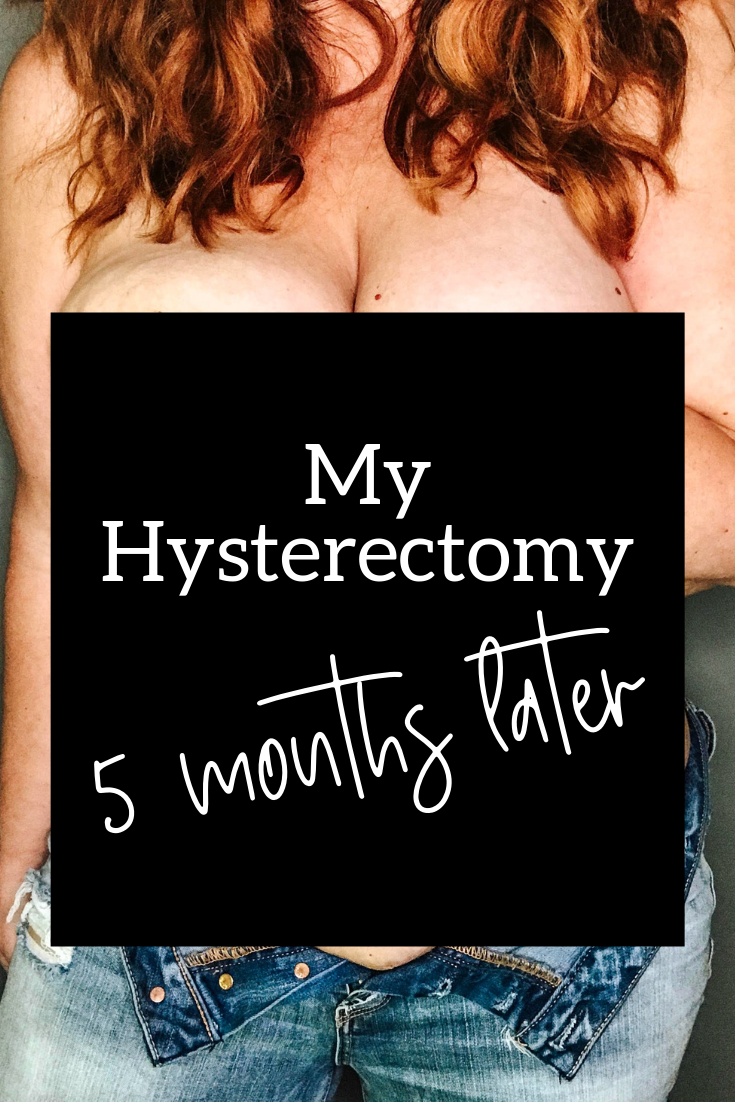 You don’t really think of a massive organ purge as self-care, but I’m here to tell you that you’re wrong.

It has been 143 days since I’ve had a uterus, some fallopian tubes, my cervix, and my right ovary.

But as The Weepies say, the world spins madly on.

Hysterectomies are one of those things that look gory and intense when they happen, but by the time you’re up and walking to the kitchen on your own, people assume you’re largely back to normal.

I know as women we often need reminded of this after we do stuff like have babies, get biopsies, or go to the hospital in any capacity, but this was a major medical event. Complete recovery can take 6 months or more, and in pure internet form, it’s also a journey that is largely under-discussed.

I mean, sure, holding a pillow against my lower abdomen was helpful in the week or two after surgery when I coughed or sneezed, but what about months later when I’m crying in a restaurant because the instrumental version of Octopus Garden is playing, or when I’m walking through a store and have to grab myself when hit with a sudden lighting bolt shock to the crotch, and wtf are these phantom ovulation pains that keep happening?

It’s been five months since my hysterectomy and mid-urethral sling, and I’m still very much recovering, but I want to talk about what exactly that looks like.

Where I am Physically:

Honestly, it took me a solid nine weeks to stick my finger inside of me.

Blunt way to open, eh? But for real, like you wouldn’t be curious?

To be fair, my urologist flat out told me that absolutely nothing could enter the Chamber of Secrets for a solid 9-12 weeks as my urethral sling healed. No licks, no dicks, no tampons sticks, I was repeatedly reminded in front of my mother.

I was anxious to peak around in there, as I have always had a very low sitting cervix, and during my period, it sat even lower, making menstrual cups a bitch to use, and sex sometimes painful.

Now it’s just… empty? Not like, deserted 80’s mall empty, but just free of obstacles empty. Like, man this room would make a great office if not for all the boxes of VHS tapes and unused litter boxes […]

To Andy, On His Birthday

Dear Andy, I took these photos of you a couple weeks ago at Disney.It was when we [...]

I remember being in junior high and kissing a boy on my friend’s bed for [...]

Girls Who Gush. It’s a Thing.

Earmuffs, modest ones! Guys, you can stick around, we can’t leave you out of this [...]

Whatever Cosmo, There’s a New Sex Quiz In Town.

You know when your partner does something during sex that does nothing for you, but you're way [...]

Yo Amazon, I'm really happy for you, Imma let you finish, but Andy Gibbons already makes the best drone [...]

Sorry, America. I Can’t Quit You.

I wasn't going to post while on vacation, first because Andy keeps giving me the mean face [...]

I recently wrote about my journey to have sex everyday for a year. It was a year, [...]

Put your feet in the stirrups. Scoot to the edge. More. A little bit more. Just a [...]

MY BRAND OF FUN

Well. This escalated quickly. Hide your pearls, we get every kind of TMI in this episode. Plus [...]

Not safe for work. Watch this in your closet with a sleeve of Chips Ahoy and a [...]

L.A. Part Two: There’s somebody sleeping in my bed. And he’s still there.

I get weird in hotels. Under normal circumstances, in my home, I'm a germaphobe. I don't use [...]

How The Hell Am I Still Married?

Any minute now. Come on. Just one more second.... Sneezes into my open mouth. Coughs across my [...]

Between You, Me and the Goblin.

Anastasia Steele was Clearly Not a Mother of Three

There are a lot of things about the Fifty Shades series that are downright preposterous. Christian can [...]

In order to get married in the Catholic church, you have to complete pre-marital counseling.  I think [...]

Uncomfortable conversations are my specialty. If there was a job that entailed sitting around all day, having [...]

And you know what that means? Puppy love, of course. Also, awkward making out/possible sex in the [...]